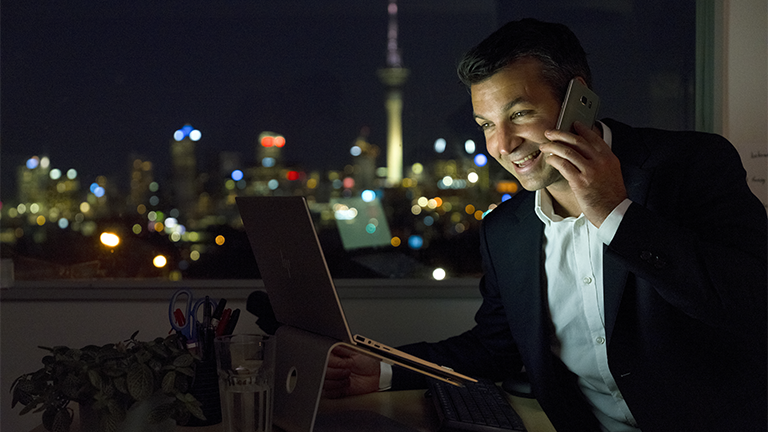 18,000 devices had to be installed across 60 locations within New Zealand within a three-month window.

Scaling up to 40 resources, collaboration between Spark and the customer project team was key to the successes.

Digital technology can have a significantly positive impact on New Zealand’s social and economic well-being. Enabling stronger, safer, more connected communities (even in the most remote rural areas). Opening up more opportunities for children (regardless of their socio-economic backgrounds. Improving health outcomes for New Zealanders of all ages and walks of life.

It can enable Kiwi companies to compete and win on the world stage and become smarter, agile businesses as they harness all the benefits of new technologies such as Cloud services and the Internet of things.

Spark's success is dependent on their customers in one key market – New Zealand. That's why they’re passionate about using technology to be truly useful to their customers, helping make the country better and enriching the lives of all New Zealanders. Spark wants to be the most valued brand in the home and the most trusted partner for business.

A large Government organisation, which has an already established relationship with Spark, went to us with a problem. An application, which was key to servicing much of the population of New Zealand was in the process of being upgraded. The problem was that desktops and laptops used by department employees had not been upgraded for five or six years. There were already concerns, that productivity and customer service times were declining. Now fears that the upgraded application would expose the shortcomings of aging desktops and laptops. In addition, the existing small monitors made working with applications less than productive.

An opportunity to refresh these devices in processing centres had been under discussion for some time, but the imminent application upgrade really forced the issue. Spark was selected as the supplier for this project based on its ability to:

The timeframe was becoming very critical – essentially, the project had to be completed in time for the cutover to the new application, but there were substantial challenges to overcome. Eighteen thousand devices had to be installed across 60 locations within New Zealand within a three-month window.

Spark established a project team headed up by a dedicated project manager and it worked closely with a corresponding project team from the Government organisation. Within the Spark project team was another team that had deep knowledge of the DaaS offering.

In a secure warehouse in Hamilton, members of the Spark team staged the equipment. All the devices were asset-tagged, the various configurations were built in the warehouse and operating system images were pre-loaded on the desktops and laptops. Initially, it was decided to build Windows 7 images, with the intent to roll out a Windows 10 upgrade subsequently. It was felt that given the time constraint, the added complexity of an OS upgrade wasn’t warranted at this time.

The deployment of all 18,000 devices was carried out with the assistance of a Spark partner. A master schedule with the sequence of deployments was created while recognising that on occasion, the customer would require last minute changes to both locations and the number of devices. This turned out to be the case, so Spark’s ability to scale up as well as scale down both the human resources and the equipment was essential. Scaling up with little notice was a significant challenge, but the challenge was met.

Without going into specific detail about exact models of desktop and laptop, the following characteristics were common across the fleet, all devices included:

The upgrade process was very simple. For any one of the 60 locations, a team of up to 40 people (or as few as five or six) would turn up at the location after hours. For each user station, a desktop or laptop and a large monitor was installed. Included at each workstation was instructions on how to download the applications required for the job function. Spark resources would remove the old devices, and these would be subsequently digitally erased and disposed of. Customer staff would turn up the next morning and follow the instructions provided to download their applications from the web.

The project was completed in three months, even allowing for a Christmas break in the middle of the project window.

Keys to success and overcoming challenges

Clearly the timeframe was challenging and the ability to be flexible was important. Scaling up to 40 resources when far fewer were planned for was not easy, and the collaboration between Spark and the customer project team was key to the successes.

The biggest asset in completing the project was common sense. Even when challenges were great, being flexible, adaptive and using common sense were key. All members of the Spark and customer teams were focused on the same goal.

Spark’s ability to take on such a massive infrastructure roll-out in such a constrained timeframe was key to the high degree of customer satisfaction. Considering that 18,000 devices had to be configured and built with a custom operating system image. Installed on desktops, laptops, and set up in 60 plus locations across the nation outside of working hours. Also, the existing infrastructure had to be removed and digitally erased. The project was a testament to Spark’s capabilities and processes.

It should be noted that, while this project was quite large in scale, Spark is more than happy to take on projects much smaller. Spark’s customers range in size from small businesses to large corporations and Government organisations. Clearly, for this project, it was important that Spark was able to provide human resources (and quite a lot of them) outside of normal business hours. This didn’t pose any problems for Spark.

The customer was delighted with the outcome. The quality of the HP gear was considered outstanding and was key to achieving a high degree of user satisfaction. Each user was amazed at how fast their computers booted and how fast their applications ran. The service provided by Spark was very much appreciated, and the customer’s early confidence in both Spark and HP New Zealand was vindicated.